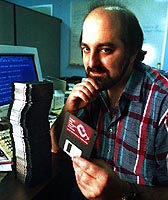 Here's an interesting read about computer genius Phil Katz, the creator of the 'Zip' archive format.
He was found dead April 14,  slumped against a nightstand in a south side hotel, cradling an empty bottle of peppermint schnapps. The genius who built a multimillion-dollar software company known worldwide for its pioneering "zip" files had died of acute pancreatic bleeding caused by chronic alcoholism. He was alone, estranged long ago from his family and a virtual stranger to employees of his own company, PKWare Inc. of Brown Deer. It was an ignominious end for a man who created one of the most influential pieces of software in the world - PKZip - and it attracted the attention not only of the techno-faithful but of the mainstream press across the nation.
Read the full story here